Freedom for all voices of the Methow Valley...

.
Apparently Ken does have a case of Covid related short term memory loss…..So, here is his weekly reminder.
. 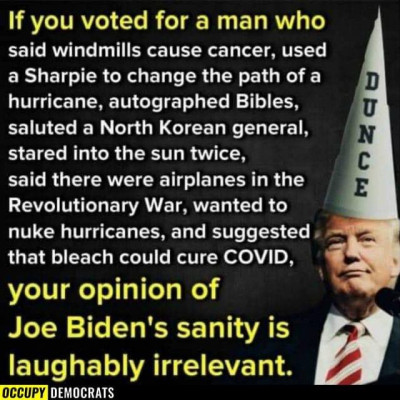 You guys are a riot! So tough now with an idiot Alzheimer’s running the country into the ground, you couldn’t toughen up to ‘mean tweets’ and $2 gas. Morons!
Top

How hard it must have been for our ancestors, those hardy pioneers, to travel across this great land and be so far from the bounty of Home Depot and Wal-Mart. You'd think with hard times these last few years people would have toughened up a bit.

Too many big babies and pantywaists out there for my liking.

I use my Hank's reward card and it causes the price of the gas I buy to go down. I only go to the stores in Omak if I have a Dr. appt. over there which is about 1 or 2 times a year. It is a shame about Penny's and if you can order online there is a savings there. It's if you trust the sizin for online ordering.
And good gried Jingles you were almost funny when you said your first born male child, but unlimited use of your daughter? And what use would that be?
Pearl Cherrington
Top

Jingles, take a look at Amazon for some of the basics. Good pricing if you are careful, (great pricing compared to local stores) and delivery is free. Fewer trips out of the valley and less mileage on your vehicle.
Top

mister_coffee wrote: ↑Mon Oct 17, 2022 7:59 am For every person who takes some responsibility and tries to solve a problem we have a hundred non-participants sitting around complaining and second-guessing.

If you don't like the gas tax, there are lots of good alternative solutions, from an electric car to bicycles to your feet. Choose one or more of them and make it work.

Living here in the Methow and drive less? Yes I suppose you could make all your purchases here in the valley groceries at either Hanks or theft way and hardware at Ace or doit center however the prices here compared to planning ahead and consolidating trips to either Omak or Okanogan to either Safeway, grocery outlet of Wally world, or Home Depot even the extra miles is a savings instead of the items needed costing you an arm and a leg, your first born male child and unlimited use of your daughter. With gas 20 to 40 cents per gal less on the other side of the loup and items at either of the hardware stores nearly twice what you can get elsewhere the savings add up fast and make the drive worth it.
Dr's visits often require going over the loup or Wenatchee and now with Penny's closed the need for even semi decent clothes requires a trip to Wenatchee.
As far as more fuel efficient vehicles already have one however groups like Methow Valley Communist Council threatens law suits if anyone proposes to open the roads for their use.
Top

The fact that you would try to point that out shows me you understand neither. Care to explain it?

If we were talking about debt, the figures would be in the multiples of trillions. (hint… your boy donnie nearly doubled it in 4 years)

I’ll stand by what I posted.
But - in case you missed it, here’s another source: https://amarkfoundation.org/us-federal-deficits/

Both Democratic presidents since 1980 decreased the federal deficit while in office: Bill Clinton had a 150% decrease to end his presidency with a federal surplus of $128 billion, and Barack Obama decreased the deficit by 53%.”
Top

Jim, you need to learn the difference between deficit and debt!
Top

Oh…you must mean ‘managing’ a budget like the Rebops have been doing for the last 40++ years….?
. 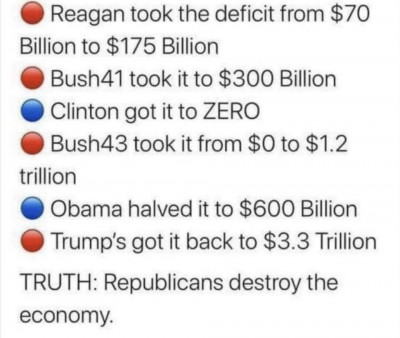 Washington already has high taxes on gas/diesel which puts our prices higher than most states. We pay currently about 45 cents a gallon and the way that this new tax works it will be a continuing rollout, in '23 we're set to see 25 cents of tax tacked on.

Of course if any of us bought a hybrid or even an EV we'd be free of worries.

How this will be implemented over the years is a complicated thing. It's easy to exaggerate the costs that will arrive because most people just can't wrap their heads around what we need to do. Best as I can tell from reading many articles, we're already paying more taxes than other states on our gas/diesel, about 45 cents a gallon. It's looking, from this article like a good bet that we'll see an uptick of 25 cents a gallon added to the already existing 45 cents.

One more reason to look at EV's or hybrids. A hybrid would make the new tax painless.

For every person who takes some responsibility and tries to solve a problem we have a hundred non-participants sitting around complaining and second-guessing.

If you don't like the gas tax, there are lots of good alternative solutions, from an electric car to bicycles to your feet. Choose one or more of them and make it work.

We need to reduce greenhouse emissions. So yeah, they want to put a tax on it, and I do agree, it's a high tax. But we could reduce emissions if people would just drive less, if industry would just fix what they spew out(i would think they can) On and on. However many people want to continue on in the lifestyle they are accustomed to. (I think I am one of those people)
A tax like this makes it hard on the worker bees and here in the Methow we just don't have the transportation structure that has a schedule that could transport workers in a timely manner. Waiting for the bus is a drag. Everyone here has to have their own vehicle.
America still has a love affair with their cars.
A big controversial green house emitter is cattle and pigs. How can that be fixed? And the houses we live in emit. Look at Twisp in the winter time from wood burning stoves.
Would gas emissions, carbon be any less under a Republican? Don't think so.
At this point it doesn't matter what party is in, as we are past the point of no return. The 70's were our chance. Drilving less may not fix it either, but if I drive less, it won't hurt the pocket book as much. But did you notice during the Covid shut down, emissions and pollution went down. Hardly any vehicles on the road.
Ah, Jingles, what would be a solution, instead of griping about who is in office?
Pearl Cherrington
Top

What's next? tax on the air you breathe? Thank you D's in political office you can't manage a set amount of income like the people have to do so you tax more so you can waste more. Maybe they should put a tax on the amount of BS they spew everytime they open their yap traps

Users browsing this forum: No registered users and 0 guests